Home ROGOZNICA What to See 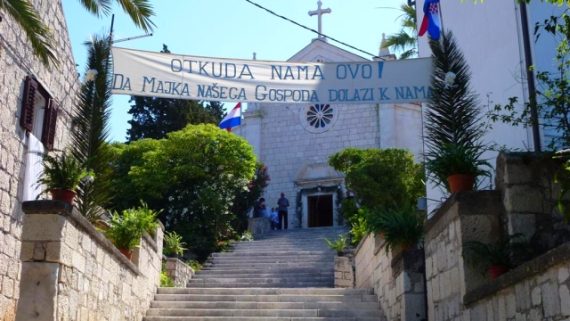 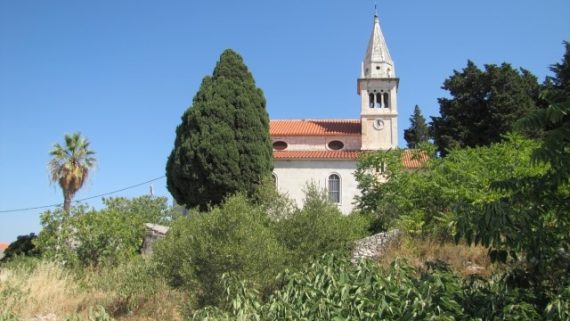 Church of the Assumption

The parish church of the Assumption of the Blessed Virgin Mary into Heaven, also known as the Church of the Assumption, is likewise protected by the Law on the Protection of the Monuments of Croatia. It was built in the early seventeenth century in honor of St. Nicholas. In 1615, Bishop V. Ariggoni consecrated the church, and its fraternal order committed to maintaining it. Expanded in 1683, the church was later consecrated in 1746 by Bishop K. A. Donadini, as evidenced by an inscription on the front. In 1800, the local peasants expanded the church at their own expense, adding to the northern section. A second section was built in 1894.
The bell tower of the French fort was built in the period of 1873-1875, and in 1875 the maritime authorities of Trieste offered a clock for the tower in exchange for the island or Mulo or Biofant, where a lighthouse was then built.
The parish of Rogoznica is special in many other ways, too. It houses the only small cathedral built in Dalmatia, wider than it is long. The cathedral is rich with valuable works of art, including a cross from the fourteenth century that is not available for public viewing and an intricate artistic figure of a shepherd from the Nativity, brought from Rome in 1905 by former pastor Ivan Katalinić. 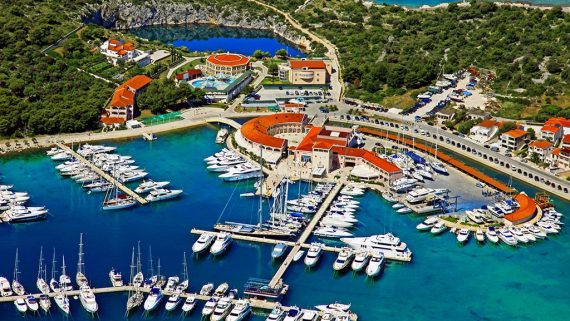 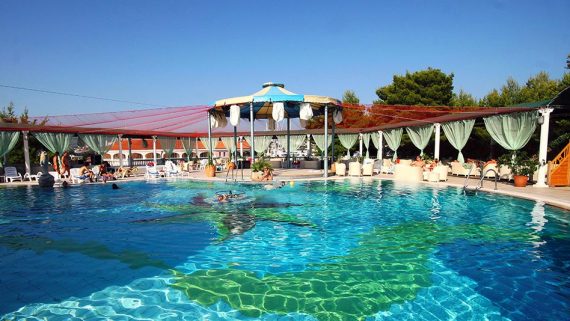 Marina Frapa is royalty among the Adriatic marinas, and certainly one of the most beautiful marinas in all of the Mediterranean. Situated in Rogoznica on the central part of the Croatian coast, between Šibenik and Split in the heart of Dalmatia, Marina Frapa is nestled in the lovely bay of Soline, and sheltered from all directions. The on-shore marina complex includes 10 jetties with 450 fully equipped berths and a guarded area for 150 dry berths. There is a 24-hour vessel surveillance service.

At Marina Frapa there are two hotels open year-round, one on the island and the other on the shore. 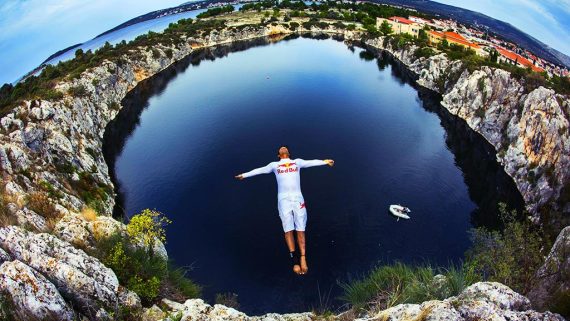 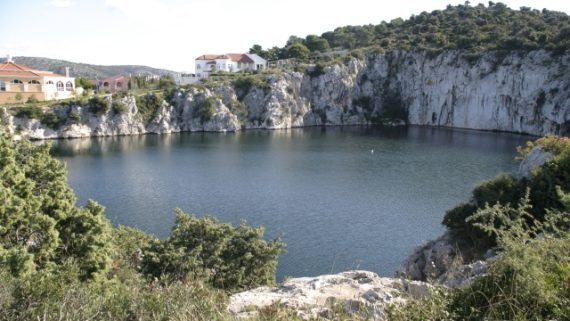 Lake Dragon’s Eye (Dragon Lake, Rogoznica’s Lake, Galešnica) is a unique geohydromorphological phenomenon on the eastern Adriatic coast that has developed distinctive flora and fauna because of its special physical and chemical properties. It is situated on the peninsula of Gradina, a narrow stretch of land that separates the Bays of Soline and Koprišće. The lake is surrounded by sheer cliffs whose average height is between four and twenty-four meters. Its surface area is approximately 5,300 square meters, with a maximum measured depth of fifteen meters. The lake has no visible surface connections with the surrounding sea, but lake and sea water both seep through cracks and channels in the porous limestone. Because of the unique environment of Lake Dragon’s Eye, with its thick bottom layer of hydrogen sulfide, many local and foreign scientists have studied it in recent years, often comparing the lake with the Black Sea, the Framvaren Fjord in Norway, or the crater lake Pavin in France. Over the centuries, it has happened that the lake “boils,” or, as scientists say, there is a rollover of the water column. This unusual natural phenomenon inspired locals to invent different legends. One popular legend tells of two brothers, one of whom was blind. The sighted brother, in dividing their land, tricked the blind brother, and in retaliation the blind brother conjured a curse: “If you have not shared the land fairly, let it all turn into a lake.” And it did. But in this lake that sometimes churns and boils lived a dragon. The dragon, says local tradition, was merciless–each year he charged a bloody fee of the most beautiful girl and the fattest sheep. Another story tells of the dragon Murin, the illegitimate son of Hera and Poseidon, who ruled the polis of Heraclea from his palace on the island of Velika Smokvica. He protected the inhabitants from invaders and marauders, and in return every year, on the longest day of the year, the people had to give him the most beautiful girl for a wife. Unfortunately, no one survived the first wedding night. Legend says that on June 20th, on the winged horse Pegasus, a hero descended called Aristoles, great-grandson of the Argonauts’ Jason. He fell in love with a girl who was supposed to wed the cruel dragon the next day. The young hero challenged the dragon to a duel, and mortally wounded the beast with a spear made by the powerful goddess Athena with lunar dust and the help of Hephaestus. As he lay dying, Murin dug out his own eyes with his claws. One of them he threw far beyond the island of Mljet, and the other slipped under his feet and melted the rock. Water filled the pit and formed a lake, which came to be called Dragon’s Eye. According to this legend about the dragon Murin, if the two people who are in love bathe in the Dragon’s Eye, they will be faithful to each other till the rest of their lives, and their marriage will be blessed with eternal love and healthy children. 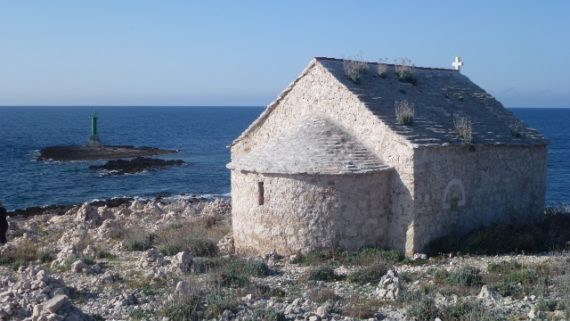 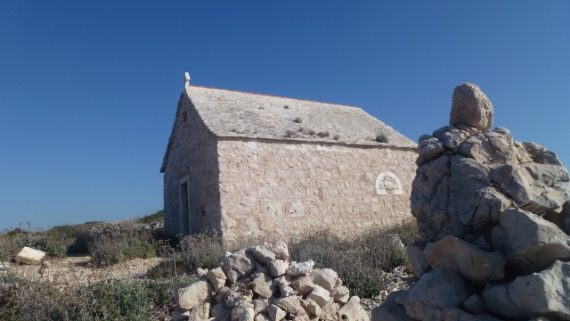 Two kilometres south-east from Rogoznica there is a Cape Planka which is the most outstretched part of the eastern coast of the Adriatic Sea, and it is a geographical and climate divider of the north and south Adriatic. It is a place of strong north and south collision of wind, cyclones and anticyclones, and sea currents. The largest waves of the Adriatic Sea crash there and on the other hand the sea is as calm as you could possibly imagine. It all creates a stunning natural spectacle which noone should miss because you can neither see nor experience similar things anywhere in the world.
This cape dramatically affects the weather conditions in Dalmatia, especially in Rogoznica where, because of its impact during the three summer months, the rainfall is only 60 mm/month, almost three times less than in the neighbouring cities of Split and Šibenik.
Cape Planka and its mood was first mentioned in the oldest preserved descriptions of the eastern Adriatic coast. It was known to Greek sailors under the name of Diomede’s Cape in the 6th century BC. Homerus in his work ‘Iliad’ reveals that after the Trojan war Diomedes himself, who was one of the greatest heroes of Greek mythology, sailed around it, and Timaeus, a Greek historian, already in 4 century BC described the unusual natural anomaly which it causes. His description of weather conditions over the Diomede’s Cape belongs to the oldest descriptions of a meteorology phenomena in the European culture. Also a Greek scholar, geographer, astronomer and mathematician Eratosthenes wrote about Diomede’s Cape in the 3rd century BC, an important epic poem about the Argonauts took place there, and in the 1st century it was mentioned by Pliny the Elder in ‘Natualis Historia’, the first encyclopedic work of European culture.
One of the miracles attributed to the Christian saint John, the bishop of Trogir from the 11th century is related to Cape Planka. According to the legend, after the shipwreck by Cape Planka he walked on the waves and saved the lives of King Coleman and all the sailors. In memory of him and his miracles, at this place a votive church was built in 1324.

The Church of St. John, a protected site of national religious heritage, is located on Cape Planka in a rugged desert landscape. The church is oriented east-west, and is rectangular in shape with a semicircular apse. The church bears the Gothic feature of the pointed arch and the Romanesque feature of the massive flange, and an even older pre-Romanesque tradition is evident in the division of the interior walls with shallow arches between the pilaster strips. Solid in shape, its thick walls were built on whenever it was possible. Though the church is more than 10 meters from the sea, waves carrying destructive salt still manage to reach it. Over time, they’ve encircled the church with jagged rocks that now form part of the overall structure. 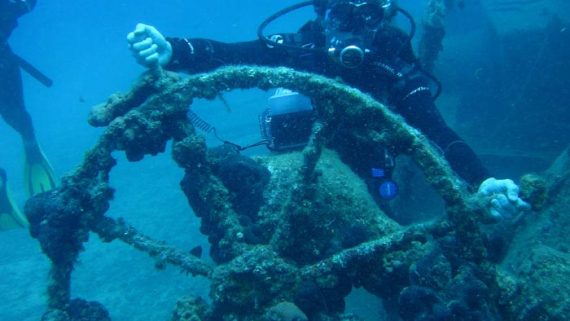 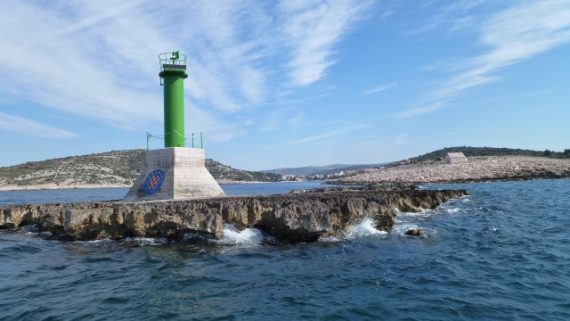 Museum in the Sea

In the first century BC, it was impossible to sail around Cape Planka or Cape Diomedes during a huge storm. This is the region of the jugo and bura, local winds that are linked to the myth of the Argonauts, and that conspire to produce one of the most deadly navigable points on the eastern coast of the Adriatic. A Roman ship transporting 150 amphorae full of wine from northern Italy to Greece anchored for the last time in the Bay of Gornji Muli in Rogoznica. For a medium-sized boat overloaded with amphorae, even a closed bay was not safe. She capsized and sank to a depth of 20 meters, hitting the underwater rocks, and her wreckage is scattered across a field 13x10m in size. The site was excavated and preserved in 1998.
During the cold days of winter and war in January 1942, a large Italian transport ship called ‘’Nuncio’’ was sunk by a British submarine between the Mulo lighthouse and Velika Smokvica. The wreck lay undiscovered at the bottom of the sea for sixty-six years. The waters around Rogoznica contain many shipwrecks from different historical periods, so we might say there is a museum in the deep blue sea, a trove of historical material intriguing to scholars and tourists alike. 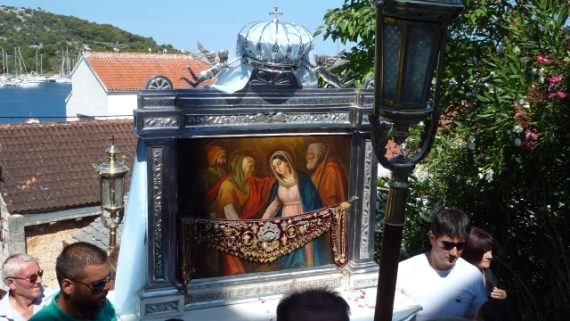 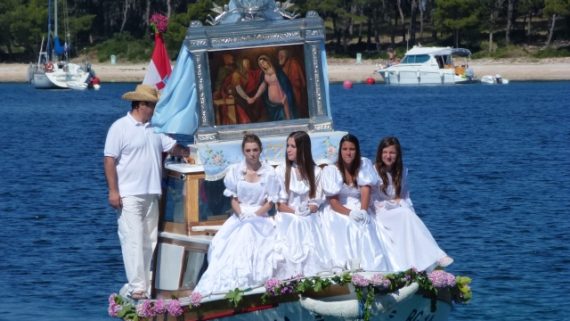 Our Lady of the Chapel

According to legend, in 1722 a fisherman named John M. Bogović-Tuburko, working in the area of the Cape Gradina, saw a strange light. When he approached the rock from which the light was emanating, he found a picture of Our Lady resting on it, a depiction of Mary visiting her cousin Elizabeth. He took the picture home and stored it in a trunk, but it mysteriously returned to the same place on the rock. This repeated three times. Soon the villagers and their priest decided to build a chapel on the site, and a ceremony that continues today was established in 1776.
The miraculous image was destroyed in a fire in the parish church, and a second one, made in Vienna in 1888, was stolen in the 1960s. Next to the original small chapel, a bigger one was built in the period of 1907-1909.
The ceremony is held on July 2nd on Petrovčica, where the painting of Our Lady is transported by a ship accompanied to the coast of Rogoznica by priests and young girls dressed in white robes. The painting is welcomed by the Bishop of Šibenik, priests, and thousands of believers, then borne to the parish church in a solemn procession along the coast.
Our Lady’s image remains in the parish church until the first Sunday after the celebration of Our Lady of Carmela, when during a solemn pilgrimage by sea and land it returns to its sanctuary on the tip of the peninsula of Gradina. This procession includes hundreds of boats and thousands of believers on foot, many of them barefoot for close to 2.5 km. In the past, Our Lady’s boat was followed only by boys, but today girls participate, too.
In 1887, an epidemic of “black measles” ravaged Rogoznica, killing 40 victims a day. The pastor, Don Tode Pavlović, gathered his flock and they went barefoot in the sanctuary of Our Lady, praying for mercy. From January 24th on, people stopped dying, the sick were healed, and on that day, Holy Day, a Mass is held in the chapel.
Our Lady, the miraculous protector of Rogoznica, kept her people and port safe from disease and suffering for almost three centuries. 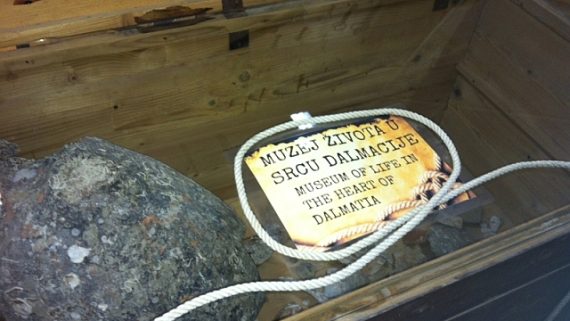 MUSEUM OF LIFE in the Heart of Dalmatia 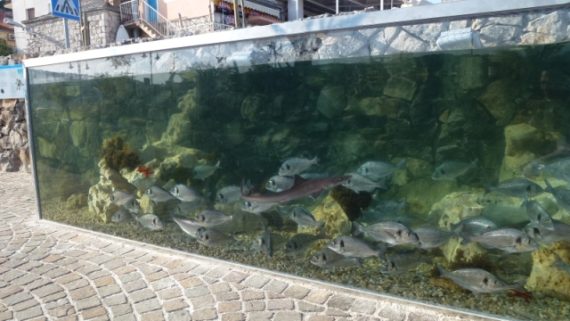 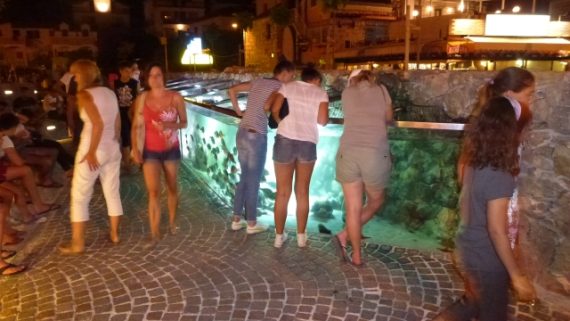